Through the next couple of months or so if you end up in a greenside bunker there is every likelihood that the sand is going to be wet and as such takes on the same sort of consistency as concrete. This makes a difficult shot under normal conditions an absolute nightmare.

The main changes to your normal greenside bunker technique mainly centre around the fact that you will not be able to dislodge a plume of sand when playing the shot as you would aim to do in the drier conditions. Because of this the first change would be to avoid using a sand wedge, particularly one that boasts a large bounce angle, something that normally stops the club digging and getting stuck in the sand, very much the way skies are turned up at the end. But in this situation, the bounce will actually do as it’s name suggests and bounce off the hard surface and end up hitting the ball in the belly leading to either the ball firing straight into the bank of the bunker or even worse, disappearing over the green at head height. A lob wedge with a low bounce angle or even a pitching wedge is better. 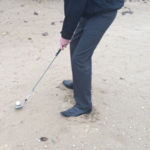 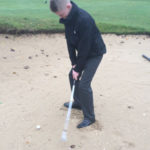 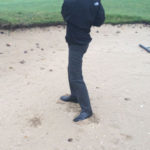 Next, keep the ball position forwards in the stance and as you swing at the ball you aim to make a shallow angle of attack on the ball, this can be difficult and dangerous as again if you hit too high up on the ball you will do as mentioned above. But if the sand is that hard, there is no way you can get the club to slide under the ball and take a divot of sand so you are going to need to pluck the ball more cleanly off the surface than usual. The choice of club will have a bearing on the flight of the shot and the stopping of the ball on the green, the pitching wedge will have to have more room for the ball to slow down where the lob wedge may well get a super amount of spin when played well and will stop on a sixpence.

I would still always offer the advice of try to avoid going into bunkers, particularly during the wet season, but these small alterations may still allow you to get out unscathed.