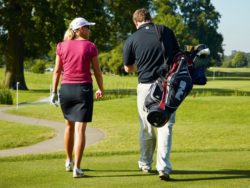 Last autumn I had the pleasure of escorting a party of 14 of my customers on a golf coaching trip to Marbella in Spain. One of the courses, Rio Real Golf Club, had a format for teeing off that I have heard about before, but never experienced: non-gender specific teeing areas. In other words, there we no tees described as ‘ladies’, ‘men’ or ‘competition’. Instead, they were referred to by numbers: 51, 55, 58 and 61. Now, early in the morning after a night of socialising in Marbella with the group, my brain did struggle to understand the significance of these numbers until a far more intelligent (and sober) member of our ensemble pointed out that the numbers related to the length in Metres of the golf course. What a genius idea.

In the group I was with the standard of the players varied considerably, and not only because of the blood alcohol level at any given time. I was playing off scratch (a travesty in my opinion) and then we had a couple of low teens handicappers, a selection of mid twenty handicaps and a splattering of 30 to 45ers. So the teeing areas at Rio Real allowed all the players to select where they were going to have the most fun from. Crazy idiots like me that like to test our game to the hilt were sated by playing the 6,100 metre monster. Most sensible people played off the standard 5,800, but a couple of the ladies in our troop, were big hitters and enjoyed the challenge of the longer shots. The 5,500-metre course offered a stern enough test for most of the high handicappers, but the brand new players, or the ones most injured by the previous night’s excesses, were able to massage their egos a touch from the 5,100 starting point.

It worked extremely well and the results were closer than on other days at other courses. The lingering memory of the higher handicap players was that they thoroughly enjoyed and would like to play again, even though this was certainly not the best of the 4 courses that we played. The fact that the higher handicappers were a little more competitive for the prizes made their day.

Golf has to stop gearing itself for the 0.001% elite players and stop thinking that everyone that plays wants to face the sternest of challenges. Making courses longer and longer just helps a small percentage of people and reduces the fun for the vast majority. It also adds so much to the time it takes to get round the golf course. I know so many of the guys that I teach would love to make their rounds a little easier, play less shots and challenge more when playing their mates. If they could do this by starting a little further down the fairway, wouldn’t this be a good thing? Wouldn’t it make the game more appealing to newer players?