My golfing hero is… Justin Rose

English golfers have done very well over the last few years, none more so than Justin Rose. But it wasn’t always that way for him. I first became aware of Justin Rose, like most people did I guess, when I watched him hole an unlikely shot on the 18th of the 1998 Open Championship, to claim 4th place while still an amateur. This phenomenal achievement in the world of the highly paid professionals helped convince him to make the jump and turn pro the following day. But as we all know, this game can be cruel. One week your game is world beating and the next, or in Justin Rose’s case, the next 22 weeks, it isn’t. That is how many tournaments in a row that Justin missed the cut. So if there is ever a great example to all about the need for patience and perseverance, both in golf and in life, then he is the man.

When Justin started winning he couldn’t stop. He became the first Englishman to win a major since Nick Faldo and the first Englishman to win the US Open since Tony Jacklin in 1970 when he triumphed 2013 at Merion Golf Club. He is a truly global golfer, one of only 5 players ever to have won golf tournaments on all 6 continents of the world. This was completed when he won the titanic battle with Henrik Stenson for the Olympic Gold Medal in Rio in 2016. 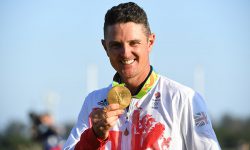 Justin embraced the Olympic ideal wholeheartedly, staying in the athlete’s village and clasping and kissing the Team GB logo on his shirt after the winning putt. He showed what it feels like, when you play sport for the sport’s sake, rather than just for financial reward. When many of the highly paid golfing stars were finding any reason not to take part in the greatest show on earth, Justin was proudly flying and in fact carrying, the flag for Team GB.