It has been a fantastic year for women’s sport and not before time if you ask me. The women’s football World Cup, the cricket, netball have all enjoyed the recognition and tv coverage they both deserve and need. Now golf gets to take centre stage with the Solheim Cup, starting on September 13th, at the beautiful Gleneagles resort in Perthshire Scotland. 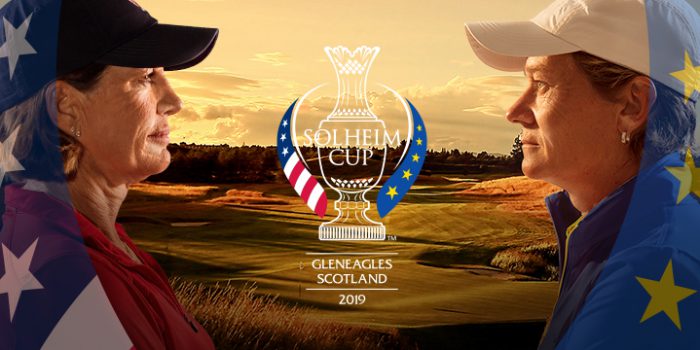 This is the biennial ladies team golf match played between twelve professional golfers from the USA against twelve from the continent of Europe. The format is exactly the same as the Ryder Cup and this year, they are using the venue that played host to the Ryder Cup in 2014 (remember Jamie Donaldson’s winning shot?). Those who follow the Solheim Cup will know that the competition has also delivered some equally exciting finishes as its male counterpart.

Can the ladies emulate their male compatriots?

On the previous fifteen occasions that it has been played, the Solheim Cup has been won by the Americans ten times. Not as dominant as they were against the men in the early days of the Ryder Cup, but certainly a better return than their male compatriots in more recent times.

It is fair to say that the American team will have more strength in depth than the Europeans. But wasn’t that always the case with the men? How many times in the Ryder Cup was it suggested that the Americans were stronger individually? And yet team Europe seem to band together better, play more as a team, perform remarkable feats in adversity, to produce unexpected results.   I for one, think that could be on the cards this year at Gleneagles. This is a Europe team brimming with youth and fearlessness. We have more players making their mark on the LPGA tour, than I can ever remember before. Even if this year is a touch early for many of our stars, with so many of our ladies in their early twenties, the future certainly looks bright.

So, to a prediction. Obviously, I hope for a European victory, but most of all I hope for an exciting viewing spectacle. We are unlikely to match the epic accomplishments of Ben Stokes et al in both the Ashes and World Cup, but Solheim 2019 could deliver moments as exciting as we have witnessed with the Ryder Cup.

I just hope it is down to the wire and results in more ladies and girls wanting to take up our wonderful sport.