The Other Ryder Cup in Vilamoura October 2014

Home > The Other Ryder Cup in Vilamoura October 2014

The professionals at World of Golf Sidcup, Dan Rickett and World of Golf New Malden, Jon Woodroffe have often arranged coaching trips to Portugal and Spain for their clients, so in this Ryder Cup year it seemed an ideal time to combine a trip and add a Ryder Cup challenge to it.

So October 3rd to 6th the battle was waged. The teams were made up of 8 players from Sidcup, would have been 9, but one of their player’s wives broke her leg the night before the trip. New Malden’s team was made up of 16 players, many of which are still fairly new to the game, but all had been on coaching trips with Jon before, and had all played at least one of the courses the match was to be played on, so if there was to be a home advantage, it was theirs.

The teams arrived to warm sunshine on the Friday lunchtime and collected to meet at Vila Sol clubhouse for the introductions. After lunch they all played a Texas Scramble round the 9 hole course at Vial Sol. This way all the players were mixed so that they would get  to know each other while trying to help each other, rather than the format of the next 3 days where they would be desperately trying to beat each other. This proved to be very successful, and a good way for each team to size up the opposition, in a friendly way. New Malden learned that the 24 handicap James Ryall from Sidcup was a huge hitter of the golf ball, and Sidcup learned that the ladies representing the New Malden team were going to be tough to beat as they were so steady in their play. 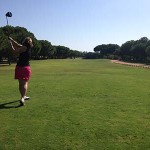 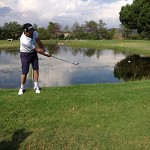 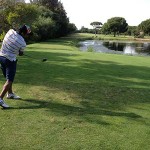 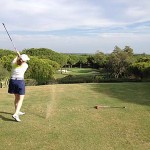 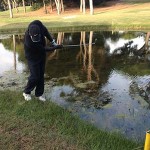 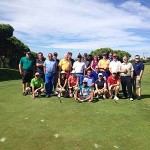 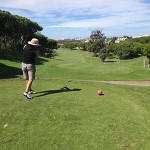 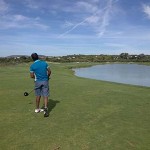 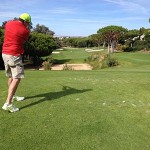 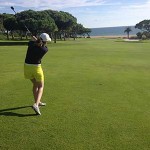 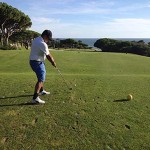 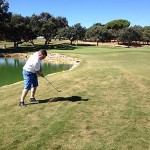 After an evening spent at La Cabane restaurant in a local village, allowing all the players to get to know each other off the golf course, all participants retired to Vila Sol resort to prepare for the tournament to begin in earnest.

The morning was spent on the practice ground at Vila Sol receiving final teaching tips from their respective professionals and then the first round of 4 four ball better ball matches were played on the championship course at Vila Sol.

As New Malden had 16 players to Sidcup’s 8, Jon Woodroffe made sure that each of his team members played either on the Saturday or the Sunday in the four ball better ball matches, whereas all the Sidcup players played all the matches. It was a hard fought afternoon’s golf with Sidcup coming out leading 3 points to 1.

That evening, all the players went into the Vilamoura marina. After a lovely meal at Lamparo’s Italian restaurant, most of the Sidcup team sensibly retired to the Vila Sol resort to prepare for the next days four ball better ball matches. But the New Malden team, continued to make an evening of it, cheering both their coach and one of their players who happens to be a semi professional singer at the Karaoke bar. This continued late into the night, and in fact it is truer to say early into the morning, maybe in hindsight, not the best mental and physical preparation for the golf match to come, but my goodness, they had a great time.

So Sunday again started with a coaching session with the respective professionals at Vila Sol and then the teams were transported to the Vale Do Lobo Ocean course. The venue was truly stunning and received rave reviews from all the players, with the last few holes playing down towards the ocean and offering the most spectacular views. The result was the same again, another 3 points to 1 win for the Sidcup team, leaving them with a healthy 6 points to 2 lead to take into the final days singles matches at the beautiful Laranjal golf course.

The first tee off time at Laranjal was 8.30am, necessitated by the return flights to Gatwick that evening and this certainly helped the New Malden team as it facilitated a relatively early return to the Vila Sol resort, well at least before 2am in most cases.

Laranjal was another level up in condition and layout of golf course, truly challenging and absolutely beautiful, even through hard to open eyes at that time of the morning. The singles pairings had been chosen by the professionals the previous evening during the meal of steak on the stone and copious flowing beer and wine at Ancorra restaurant in Vilamoura marina, and there had been some very interesting match ups. Sidcup’s only lady player, 17 handicap Corie had been paired against New Malden’s rising star lady player, Jane De La Haye and they were in the first group. This was a huge deficit to come back from as Sidcup just required 2.5 points of the available 8 to win the trophy, but straight from the get go, New Malden came at them. Jane De La Haye won her match with Corie 3&2 and even though Richard Coghlan beat New Malden’s answer to Poulter, Neil Prothero by a similar score, New Malden were at that point up or all square in every other match, so game on.

The next 2 matches saw wins for New Malden by Phil Intallura and Lucy Hayden, each on the last hole. Ray Davis who had at one point been 5 up on Dave Minshull was pulled back to finish all square and Gill Simpson had beaten an out of sorts Jon Baker handsomely meaning that the score was now 7.5 to Sidcup and 6.5 to New Malden. Chantal Belanger had been 2 up against Rick Hawkins and Martin McDonnell had been level with Steve Lennell for much of his match, but as the pressure told, the 2 Sidcup players turned their matches and they sneaked home by a margin of 9.5 to 6.5, although New Malden could take pride in the fact that they won the singles by 4.5 to 3.5.

Sadly there was not much time to savour the victory as the flights were waiting but after a truly brilliant weekend where all the players had made a whole new group of firm friends, 24 tired teddy bears headed home to Gatwick having experienced a great game of golf with lovely people in a beautiful part of the world and the sunshine just did not stop shinning.