As if it wasn’t bad enough getting stuck in a bunker with a huge great lip on it anyway, but then to find that your ball has buried itself in as if taking cover from the enemy. So when you get a plugged lie such as the one in the picture, don’t abandon all hope just yet. 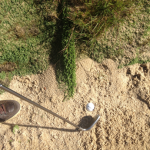 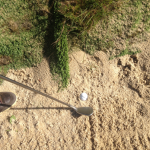 This way works like a geyser, a fountain effect, in that as the force of the clubhead is swung into the sand behind the ball, this pushes the sand that the ball is lying on into the face of the bunker where it has nowhere to go other than upwards, as in a fountain. With sufficient force this “geyser” of sand will shoot the ball up almost vertically causing it hopefully to just pop up out of the bunker. It will not make much progress but it should be enough to get the ball on dry land. The sharp toe end of the sand wedge going into the sand first acts like a knife, allowing more of the energy to be applied to the sand under the golf ball.

In the worst case scenario, at least this will dislodge the ball into a more normal position in the bunker allowing you to play a conventional recovery from there, although I think you will find it will be more effective than you would expect.