My Golfing Hero is Seve

Home > My Golfing Hero is Seve 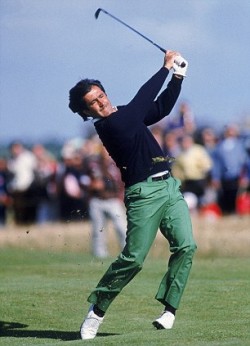 When I was growing up I was an decent swimmer and my big hero was Mark Spitz, I stopped swimming when I was about 13 years old and wasn’t really doing much. I sat with my father on a very sunny day in July 1988 and watched the final round of the open championship from Royal Lytham and St Annes. What was strange was the tournament actually finished on a Monday and they were playing in three balls. Normally the open championship, over the weekend, is played in pairs, but because the weather was so bad that a they had to extend the championship by a day and also they had to playing three balls, so they can get people round as soon as possible. In the final group was defending champion Nick Faldo, Nick Price and Seve. I barely blinked! I couldn’t believe that someone could have that many people watching them play golf or play a sport for that matter that they could be under that amount of pressure and look as though they were really enjoying it.

Seve went round in 65 shots and basically smiled all the way round acknowledging the crowd and finished off one of the greatest final rounds of golf, in my opinion, with a very tricky delicate chipshot from behind the green out of a fluffy lie and nearly holed it! I couldn’t wait to play golf so I went out after watching Seve with my father to play nine holes of golf around Strawberry Hill golf club, which, though I didn’t know it then was to become my junior golf home. I felt as though I was playing like Seve – even though it took me 128 shots to go around the golf course! The charisma of the man was infectious. His escapology and shot-making was legendary. His passion for the game, the thrill of competition and his affinity with the Ryder Cup was simply amazing. I feel very fortunate to have actually met him a couple of times and watched him play rounds of golf when he was still playing good golf.