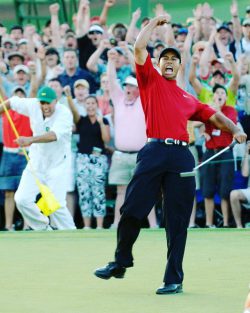 This season’s Masters is upon us and we wait in eager anticipation for the drama to unfold. The tournament has a special place in the heart of all golfing fans for so many reasons. It signals the start of the golf season; the course is stunning and the history of the event is full of magical memories.

We invited the team of World of Golf professionals to come up with their abiding memories of the Masters. Here they are:

Duncan Woolger:
Larry Mize chips in from 140 feet to beat Seve Ballesteros and Greg Norman in 1987

Going into the playoff, Mize had just come off a 5-foot birdie putt in the regulation rounds to get into the playoff, but was still the underdog, behind Greg Norman, Number one at the time and Ballesteros the two-time Masters winner. Many pundits had given the green jacket to Norman already, and by Mize’s own admission he was nervous, Ballesteros three putted on the first playoff hole to leave Mize and Norman vying for the title. Mize hit his second shot right, with Norman on the fringe. Scoping out the approach Mize uttered to himself that if he managed to bounce his shot twice to the fringe he could make it. Mize selected his club, a sand wedge and played the shot to complete perfection. As the ball rolled into the cup, the sand wedge was hurled into the air and Mize ran around the green in utter disbelief. When Norman missed his shot, Mize was a homeboy Masters Champion.

Described as one of the best bunkers shot ever played. On the Sunday, the closing holes were very tight, the leaderboard read, Calcavecchia -6, Lyle and Stadler -5, Crenshaw -4, with Couples also moving to –4. Lyle needed something special, a moment, that would go down in Masters history. He came up with it on the 18th. Lyle’s ball lay on the uphill of a bunker, pulling out his 7-iron, he struck the ball sweetly and the ball landed 20 feet from the pin. As soon as the ball was in the air, Lyle new that he had done something special, raising his arms in celebration, hugging his caddie in jubilation. The ball slowly span back to within 7 feet. Lyle rolled the putt in for a birdie and Masters immortality.

Rory led by 4 shots, going into the final round, but by half way his lead had been cut to one. Rory had three bogeys during the first three rounds, but by the time he had finished the championship he had four, plus the triple and a double. Leaving the green, he was met with warm applause that crescendoed into loud cheers, but it did nothing to up his spirits. Later, Rory admitted that the meltdown as the Master was one of the most important days of his life.

Heading into the 1996 Masters most experts felt Greg Norman was well over due for his first green jacket but also that time was starting to run out for the blonde bombshell from Queensland. He went into the championship having recorded seven top six finishes in his fifteen starts at Augusta, a course his game appeared to be tailor made for with his combination of power and touch. His start to the tournament was sublime, firing a course record tying 63 followed by rounds of 69 and 71. Standing at thirteen under par through three rounds he held a six shot lead over his arch nemesis, the Englishman Nick Faldo. To all concerned it appeared as though the final round could be nothing but a glorious stroll to victory for one of golf’s biggest under achievers in majors. Unfortunately for fans of Norman that is exactly what didn’t happen. The final round turned into an abject disaster for Norman, as one poor shot followed another and Faldo gave a masterclass in relentless precision under final round pressure. The final result had Faldo shooting a magnificent closing 67, whilst Norman slumped to a miserable closing 78. A six shot lead had turned into a five shot deficit. One of golf’s all time great talents had once again found a way to snatch defeat from the jaws victory.

Jack Nicklaus had not won a tournament since 1980 and many were calling for him to retire. Starting 4 shots of the lead, in ninth, it wasn’t until the back nine that Nicklaus charged to the top of the leaderboard. Jack went, Birdie, birdie, bogey; birdie, par, eagle; birdie, birdie, par, to tie the course record, only using 30 shots to get round the back nine. The win did not come easy though, Nicklaus had to watch all 3 of his closest rivals, Greg Norman, Seve Ballesteros and Tom Kite come in one by one as he nervously waited to see if he had done enough. His victory was a huge achievement, as the last time that he had won the masters was in 1975. The round produced one of the most iconic images of Masters’ history, Jack holding his hand up in delight as he watched one of his puts roll into the cup.

Sebastian Grobler:
Phil Mickelson’s miraculous shot in 2010 from the pine straw, in between two trees

For most people lying on pine straw means laying up from the back of the fairway, and taking a second onto the green. However, Phil Mickelson does not play golf like normal people, with a 4 feet gap in between two trees, he decided to go for what seemed to be an impossible shot, and risk losing a 2 shot lead. To make things harder, there was water in front of the green, with a carry of 187. Again, this seemed no problem for Phil as he walked up to his ball and decided to go for it. He then proceeded to hit the greatest shot of his life, as the ball flew over the water, landing 5 feet from the pin. Mickelson sauntered out from the woods, giving a little fist pump and another Masters moment was borne.

Tiger stood on the back of the sixteenth green walked to the middle and picked a landing spot 25 feet above the hole. The shot looked unplayable. He played a delicate chip onto the green, a long way from the hole and the ball began to run down the slope, rolling and rolling, getting nearer and nearer before stopping on the lip. One more dimple role and it would have gone in. Everyone sighed with disappointment, then the ball dropped, it is magical even now as I watch the shot 11 years later. The crowd could not believe what they had just witnessed. Probably one of the most iconic sport moments ever and possibly the best golf shot that has ever been played.

Do please share your Master’s memories with our team of Pros when you next visit World of Golf London. And while your full of Masters inspiration, why not try out the new generation Protracer? Now installed on every bay, Protracer is an innovation in golf technology that will make your whole range experience more fun and more productive than ever before.