A favourite tip for better bunker play is to avoid them in the first place.  Sadly, this is unlikely to be of any practical use, so we better come up with an alternative. Firstly, you need to practice more in bunkers. Most players are not very good at getting out of sand. With only limited time available to practice golf they also don’t like spending it on areas of the game they are not very good at. Thus, the vicious cycle continues. The professionals, on the other hand, tend to practice about 5 hours a week hitting a variety of bunker shots. In contrast most golfers are lucky if they spend 5 hours of their life practicing these strokes.

Most players I know, when caught in a green-side bunker, are familiar with the idea of hitting the sand a little behind the ball, rather than making direct contact with the ball. So, I would rather focus on one part of the bunker shot that most people fail on: the follow through. After hitting the sand behind the ball, what often happens is the club grinds to a halt. 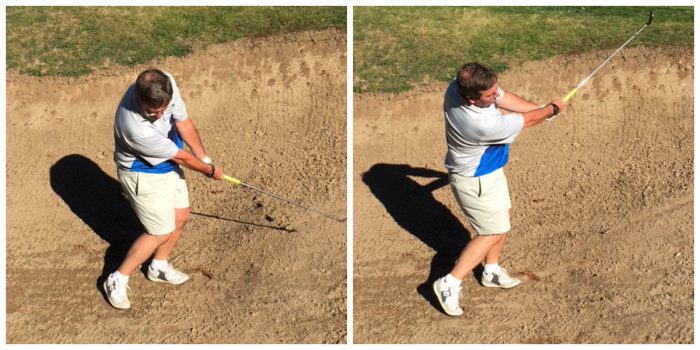 The result is that the cushion of dislodged sand only travels a foot or so, which is exactly what happens to the ball too. So, here’s the master tip: make sure at the end of the bunker shot swing, your belly button, or belt buckle, whichever you would like to use, is facing the target. If you do this, you will have maintained sufficient forward momentum through the bunker shot, to give you a better than even chance of the sand, and thus the ball, having enough forward propulsion to come out of the bunker.

Try it and I bet you will improve your bunker play. If this tip only gets you to try and spend more time practicing your bunker shots, then it will have the effect of making you better anyway. Job done.

Categorised in: Golf lessons, Tip of the month